The Madu Ganga River is a shallow water body in south-west Sri Lanka, which enters into the sea at Balapitiya. Take a magical boat ride down the beautiful Madu River, a wetland estuary spreading over 900 hectares of which 770 hectares is covered with water and inhabited with 64 islands. The boat ride is a wonderful way to take a closer look at this complex wetland ecosystem; a world heritage site protected by the Ramsar Convention on Wetlands being one of the last wetlands in Sri Lanka to contain a pristine mangrove forest. The, reach to Galle Fort, the UNESCO World Heritage site located in down south of Sri Lanka. Galle Fort is the best example of a fortified city built by the Portuguese in South and Southeast Asia that shows the interaction between Portuguese architectural styles and native traditions. Galle Fort is a trendy place to enjoy the architecture, history, shopping and taste some best food and wine in the road side cafes. Then proceed to Kosgoda Turtle Hatchery to see various verities of Sea Turtles and possibly release a baby turtle to the Ocean. 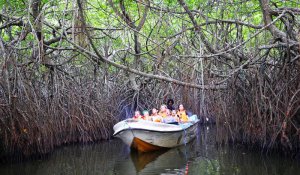 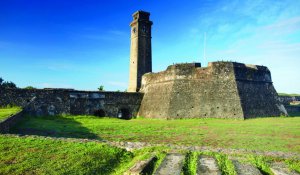 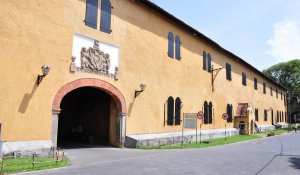 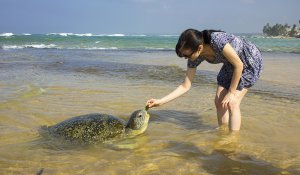 First, we reach to visit Pinnawala Elephant Orphanage. It is a most popular and accessible place to see large numbers of elephants in a natural habitat. The elephants have trained according to a daily routine. Not even that this place is a great opportunity to observe the giant creature behavior. Then we proceed to Royal Botanical Garden in Peradeniya. Royal Botanical Gardens, laid out in 1832, are among the finest in the world and its treasures of tropical flora include fine collections of orchids, aromatic spices, medicinal herbs, palms and rare, endangered plant species. Then we reach to Kandy, which was the last kingdom of Ceylon. Kandy is counted amongst the world heritage sites of UNESCO. The city promises a number of tourist attractions that include the Old Royal Palace and the famous Temple of Tooth. The latter consists of the sacred relic of Buddha’s tooth because of which Kandy is regarded as one of the most sacred places by Buddhists. If we have more time, we can visit the Tea Factory in Kandy. 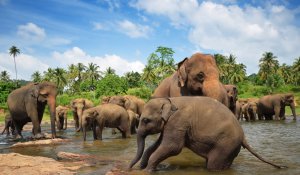 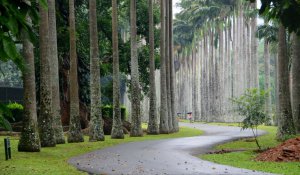 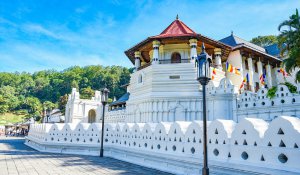 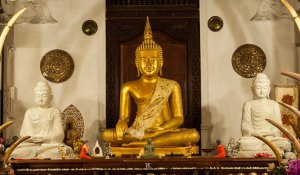 Kitulgala is a Rain Forest patch which attracts many resident and foreign tourists for its natural beauty. Experience White Water Rafting in the picturesque Kelani River, covering 5 major rapids and 4 minor rapids. This activity is for anyone above the age of 10 years with safety gear, modern rafts, and a comprehensive safety briefing will be given by our white water rafting instructors beforehand. The distance covered is around 5 KMs. The river and its surrounding will make you feel enchanted, with a memorable Experience during your White Water Rafting Tour in Kitulagala. After having this fantastic water rafting experience we reach to Ambuluwawa Temple, which is situated in Gampola. Ambuluwawa is 3567 feet above the sea level and it is a popular place among travelers. Ambuluwawa can be introduced as the first multi- religious centre and bio diversity complex of Sri Lanka. A small temple, kovil, mosque and a church is situated at the peak of this mountain. People from all the religions come there. This place is a symbol of harmony and the humanity of the country. This is the only isolated mountain in Central Province. It is not covered by any other mountains. Due to this reason it is a very good place to get a beautiful view of the area. You can get a wide view here as it is open on every direction. 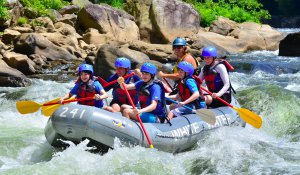 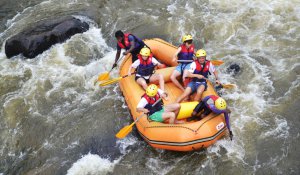 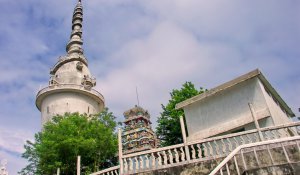 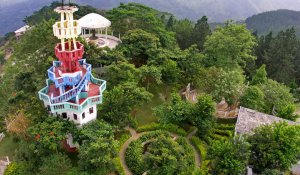 Mirissa Whale watching day trip is an exciting trip where you would be able to enjoy a great beach and Sea safari. Mirissa and its breathtaking sandy beach pretty much transforms your dreams and visions of a tropical paradise into an everyday reality. Located close to the Southern tip of the Island of Sri Lanka. Mirissa is one of the best places in the world to see one of the only recorded resident blue whale colonies in their natural habitat. You are able to connect with Whale Watching Trips off Dondra Point and Mirissa Fisheries Harbour in a fully insured purpose built Whale Watchig boat which will last for 3 to 5 hours. After this wonderful Whale Watching Tour, we proceed to Koggala.  Koggala is a famous destination turtle hatcheries. Visitors are welcome at these hatcheries as these organizations are committed on raising awareness of the importance of preservation of sea turtles. These organizations collect turtle eggs from beaches, some employing contribution from local communities, and keep the eggs in safety until they are hatched. Even after the eggs are hatched, the baby turtles are kept under safe conditions until they are fit to be released into the nature. 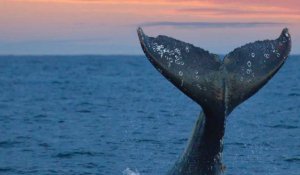 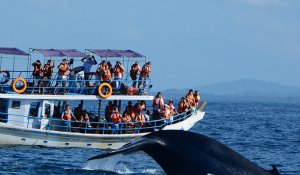 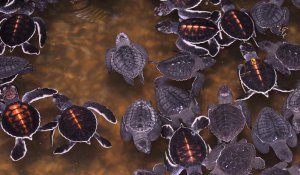 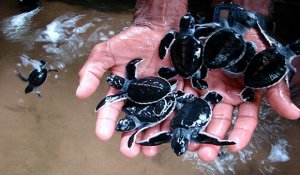 Kanneliya is a haven for many endemic and indigenous plants, mammals, birds, freshwater fish, and insects in their natural habitat and much more. It has won the hearts of many researchers and eco tourist who favor its magnificent beauty and prefer to be isolated in this sanctuary free from the bustling, polluted city life. The reserve facilitates research, trekking and sightseeing. December to February is the most suitable months to travel as it gets the highest rain fall. Usually, the streams are running with their full force of water through the jungle and create beautiful cascades and sceneries. It will make you sense. You can bath in cool natural streams. Eventually, it will energize you. 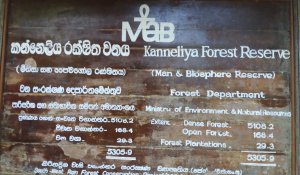 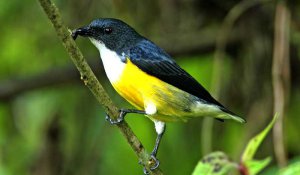 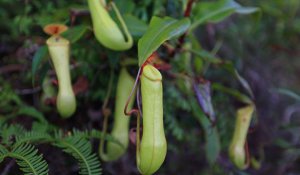 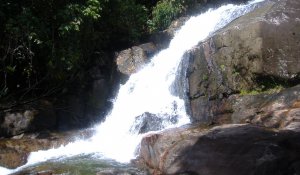 Great place to enjoy the giant Elephants very closely and the third most visited park in the country.  Situated about 200 km south-east of Colombo. Udawalawe National Park is famous for its large population of elephants. Hence, this national park is ideal to observe the herds of marvelous Asian elephants in their unique natural habitats. It is known that about 400 elephants in total are sustaining here while about 250 of them are considered as permanently resident. Other than the elephants, the national park provides home for many other species of mammals such as the rusty-spotted cat, fishing cat, Sri Lankan leopard etc. The Sri Lankan sloth bear is rarely seen in Udawalawa national park. Sri Lankan sambar deer, Sri Lankan axis deer, Indian muntjac, Sri Lankan spotted chevrotain, wild boar and water buffalo are among other mammal species that could be seen. Golden jackal, Asian palm civet, Toque macaque, tufted grey langur and Indian hare also reside in the park. The endemic Ceylon spiny mouse was also recorded in Udawalawe national park in 1989. Udawalawe sanctuary is also known as a good bird watching site in Sri Lanka. Bird lovers would get a wonderful opportunity to observe many different varieties of birds including endemic species and migrants as well. Endemic birds such as Sri Lanka Spurfowl, Red-faced Malkoha, Sri Lanka Grey Hornbill and Brown-capped babbler are among the birds found in Udawalawa national park. The reservoir attracts a huge variety of water birds such a cormorants, the Spot-billed pelican, Asian open-bill, Painted stork, Black-headed ibis and Eurasian spoonbill.

Yala national park is being the most famous and second largest wild life sanctuary in Sri Lanka. Yala national park is located in the southeast region of the country and lies at the edge of the southern province and the beginning of the eastern province. Yala National park is home to 44 varieties of mammal and over 200 species of birds. This part of the country has the greatest concentration of leopards, elephants and spotted deer. The vegetation in the park comprises predominantly of semi-arid thorny scrub, interspersed with pockets of fairly dense secondary forest.  Small patches of mangrove vegetation also occur along the coastal lagoons. The park is renowned for the variety of its wildlife, most notably it’s many Leopards and it also boasts a large number of important cultural ruins, bearing testimony to earlier civilizations and indicating that much of the area used to be populated and well developed.

The Department of National Zoological Gardens is eager to unveil it’s another flagship project for the nature lovers and pleasure hunters browsing the down south of Sri Lanka. A 500 acre drive through Safari Park, the first ever Safari Park in Sri Lanka is being culminated in Ridiyagama, Hambantota. No doubt this will add one more landmark destination to the tourist map of Sri Lanka and to the gloriest history of the Department of National Zoological Gardens and its 79 years commitment to ex situ conservation. Currently there are three zones in operation, which include the Lion zone, World Herbivore zone and the Asian elephant zone. The animals move around freely in their respective zones and are protected by automated gate systems to minimize the risk to humans. 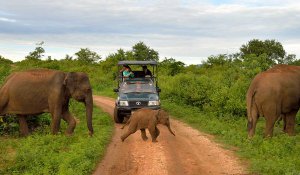 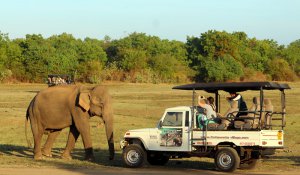 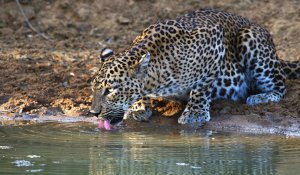 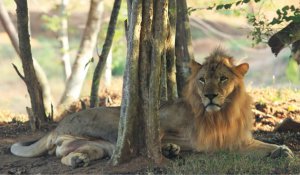 Lanka is an Island blessed with beautiful beaches and p...

Tamarind holiday is owned and operated by Sri Lankan company helping and building trust with the visitors to discover and enjoy Sri Lanka as a destination to travel.